Tim Murari
Visit my website: www.timerimurari.com My new novel, THE TALIBAN CRICKET CLUB, is set in Afghanistan 2000. Ecco Press, New York, and HarperCollins Canada will publish it in July 2012. Allen & Unwin publish it in the UK and Australia August 2012. So far, foreign rights sold to Cargo, Netherlands and Juitrzen, Norway. It's a must read novel about a woman, the Taliban and cricket. I’ve written 17 books which have been translated into several languages. Twelve are works of fiction, including the best seller TAJ that was translated into 14 languages. Penguin published my new non-fiction work LIMPING TO THE CENTRE OF THE WORLD about my trek to Mount Kailas. I also wrote a young adult novel, CHILDREN OF THE ENCHANTED JUNGLE published by Scholastic. I wrote and produced the Award winning film THE SQUARE CIRCLE. TIME magazine voted it ‘one of the ten best films of the year’. In 1999, I adapted and directed it as a stage play for the Leicester Haymarket Theatre, an exciting experience. Parminder K. Nagra of ‘Bend it Like Beckham’ fame played the main lead.


My hair stylist, once known as a lowly barber, was not watching his scissors, snipping away my locks. Instead, he was studying my face with one of those commercial looks I have learnt to recognize. I waited for the pitch – head massage, body massage, face massage, hair dye. Usually, it’s the hair dye that will turn my hair, not black, but a muddy orange.


Finally, he announced for all in the salon to hear: ‘You are dark, sir. I have a good whitener, 100 percent you will become very fair.’ My aunt, now long gone, always made a similar remark, without the ‘good whitener’. After a long winter in , where the sun barely shone and the cold cut one’s face, my aunt’s first remark when I visited her was ‘you’ve gone dark’.


I saw what my hair stylist saw. A brown face. It was the same brown I had been born with, and had never bothered about. It was part of my package like legs, arms, a head, a pair of eyes and black hair, thinning fast, on my head. I’ve had my hair cut all over the world, and the hair stylists have never remarked on my colour. At least, not to my face. He cut my hair, I paid and walked out.  Maybe he commented to a colleague later ‘that fellow had a brown face’.


Driving home, I stopped for a red light, a rare occurrence in the city, causing chaos behind me. Cars with red lights never do.  A scooter pulled up beside me, driven by a woman, She wore a long sleeved, winter jacket, zipped up, and grubby white gloves. She wore a helmet too, which was remarkable enough. It was 40 degrees in the city but the sun would never dare stain her delicate skin.


During the IPL tournament there was a commercial of a man running along the beach, having a shower (half naked muscled torso which made me tuck in my tummy) and then rubbing some stuff on his face. I thought it was an after shave. But when he brandished a dip stick showing the varying degrees of lightness, I realized it was a commercial for a skin whitener.


Of course, we have known for a long time that we Indian are the most racially conscious people on this planet. The Australians are amateurs compared to our discerning eyes which can pick the slightest variations in brown.  We’re obsessed with colour – the matrimonial columns in our newspapers are filled with ‘fair’ complexioned brides and grooms searching for the perfect colour match. The Indians we see now in our countless commercials are no longer even a lighter shade of brown. They are as white as any Anglo-Saxon could ever get. They are so white on my screen that my eyes hurt. Europeans are actually pink, not the ghostly white of our commercial models.  Thankfully, they still have black hair but, if the whitener sellers could pull it off, they would be blondes or redheads, selling us scooters, cell phones and soaps.


What brought us to this? History? In the earliest days the divide would have been Aryan/ Dravidian. The colour contrast between the nomads of central and the indigenous natives of the sub-continent. This colour colonialism had to have continued through the many invasions – the Afghans, the Mughals and, finally, the whiter than white, though they did turn puce in our Indian sun, the British. Subconsciously, we equate superiority with colour. White is better than brown, brown better than black. And as the internet and television invades our lives, we’re constantly bombarded with images of the white superiority. Those who leach and bleach their skin, all those super white models in our television commercials, are embarrassed at their own colour. They yearn for the white that will equate them with the European. While the Europeans spend billions of dollars on sun tan lotions, sun beds and lying on hot beaches, so as to look brown as Indians.


The human race is never happy with that it’s got, naturally.
Posted by Tim Murari at 9:30 PM No comments: 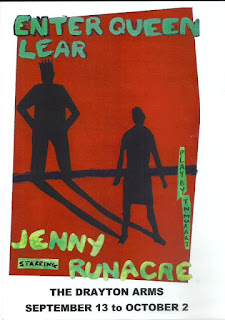 ENTER QUEEN LEAR , written by me,starred Jenny Runacre in the production which ran for 3 weeks at the Drayton Arms Theatre, London, from September 13th to October 2nd 2016.
An ageing, glamorous film star falls in love with a younger man, a refugee. Now, past her cast-by-date, she accepts to play Lear as a woman just to act again. Throughout rehearsals, she is confronted by the men in her life – two ex-husbands, two sons and the younger lover. Her only real constant is her relationship with her long time female dresser.
Jenny Runacre said: “I do really think it is a fascinating play, with so many levels in it. It is not very often that an actress is given a role that has so much meat in it.”

If you want to listen to the play, I adapted it for the radio and you can hear it by clicking on the link below.

Posted by Tim Murari at 5:18 AM No comments:

Doctrate on my writing

There is now a doctorate published on my writings. A bright young man from a university in Pune, now has a Ph.D after reading my novels and non-fiction works. You can check this out on this web link: